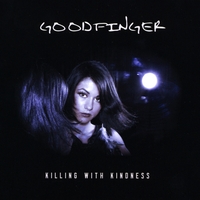 Goodfinger are a rock band on the rise, their songs have been in tv shows and video games. Their debut album proves this point.

Vocalist Scrappy Calloway has a dynamite voice and the band support her well.

Another Night is a sultry number, with a propulsive chorus. Calloway’s vocals are right on the money.

Ghost is a ballad that relies on Calloway’s delivery and she pulls it off with heart and soul. The songs’ epic scope just screams “movie soundtrack”.

A cover of Squeeze’s Take Me I’m Yours is successfully rendered, Calloway’s seductive vocal effectively underscored by the band.