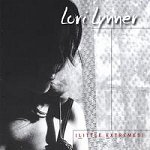 Lori Lynner’s debut opens with the Arabic-tinged “Habit” as she sings of someone who wants to escape a lover. Her strong voice gets my attention immediately. It’s like one of Alanis’ songs from her second album.

“The Mundane Hour” laments the tedium of everyday life and longs for escape. Lynner sings it powerfully and the songs divided into three parts like a modern rock opera.

“If I lost you” is a sad ballad with some clever words.

…she sings. Her vocal is feisty like a latter-day Bonnie Raitt.

“Kick of Desire” is a dramatic song with some terrific singing.

The closing “Looking for the Missing” is a gentle, poppy moment.

This is a versatile debut from the gifted Lynner.