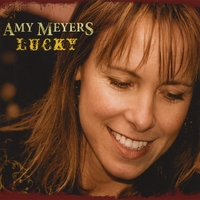 I reviewed Amy Meyers’ previous release, Strange and Beautiful a few years ago and Anna Maria reviewed The Crossing in 2002.

At the time of my last review it was really pestering my brain that her vocals were reminding me of someone else and I could not place it. That’s funny because that’s what I was thinking this time too, before even going back and reading my old review. I even asked readers to help me, but got no takers. Maybe I’ll have more luck this time.

On Strange and Beautiful, I also was struck by the feeling that the album was a mish-mash of genres. I didn’t see it as a bad thing, just different. But I don’t sense that here, this one is much more focused.
It’s pretty much straight up folk throughout.

For the most part it’s guitar based, but there’s some fun jazzy piano fiddling on January Days.

The melodies are well written if a little predictable. But I actually find that a lot with folk music and I still enjoy it.

I like the sentiment in Mondays Off (“I think it’s time for me to take Mondays off”). Good idea! She must have a job outside of music. I can’t imagine a musician caring about Mondays at all.

Summer Town is quite catchy and has stood out to me a few times.

While this is a nice record with some good tracks, they sort of melt together for me and none of the songs are really grabbing me with the exception of January Days.

← Brandi Shearer on ‘Dexter’ TONIGHT
Album Review: The Other Side by Anya Singleton →