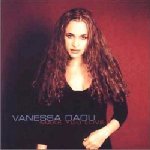 Vanessa Daou got a breakthrough with her astonishing interpretations of Erica Jong’s poems on “Zipless”.

Since then she’s made a few more albums. On the new one she continues to collaborate with Erica Jong on the tracks “Aphrodite” and “Honey in a Jar”. These songs are obvious standouts, but the rest of this smooth collection of late night music is good too.

Daou whispers rather than sings, which works fine on this material.

Vanessa Daou is not a million miles away from Sade on this album, so fans of that singer might want to try this one.

Editor’s Note: This is how Babelfish translated this to English: “An excellent, eclectico and sensual disc from incomparable zipless, to this disc, vanessa daou demonstrates that their works are an art work. Unico sound mixed with elegance and subtility. Excellent!”

Rating: 5 Stars
Comment: The album is my favorite. I «fell in love» with it tanhks to Etienne Daho, a french singer (I’m french also, sorry for my english).. The 4th song «Make you love» is fantastic. Thank you Vanessa.
by name: mhacbe on Tuesday, November 30, 2004
Rating: 5 Stars Comment: The energy and vivacity of Daou music is therapeutic–Its not easy to be among people and yet be alone–Daou music relieves this burden
by bobby glenon Sunday, November 14, 2004