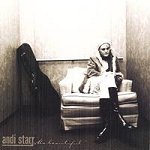 This is an achingly fragile and yes, beautiful record from Andi Starr. The title track sees her singing compelling but her words are of self-loathing. Still the song offers a tiny sliver of hope to hang on to.

“Little Angel” continues and is the barest whisper of a song, barely there but all the better for it. “Ellliott” is a tribute to the late Elliott Smith and it’s very moving. It becomes a quiet lullaby as Starr sings of missing the “man the white suit”.

“Hold on” is vaguely more upbeat and recalls Mazzy Starr. The edgy lyrics to “Billboard Bait” paint an ugly picture of Hollywood but the song remains calm all the same.

Listen closely and you get the idea.

“Me Beautiful” is a fine addition to anyone’s collection.