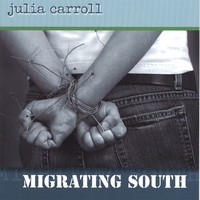 I reviewed Julia Carroll’s previous release, “2 Cents” and while I found it a bit harder than my normal fare, I enjoyed it. I compared her to Ani Difranco and so did one of the commenters. I still hear Ani’s influence but this release really brings out Carroll’s own style, which is a little more rock than folk.

The lyrics are what we think of when we think folk, that is, political at times. She’s got something to say, no doubt about that. I can see how some that don’t share her beliefs might not get her music, but I do (share them and get it).

The first track is a song, “Good Business” about women who own their own businesses, being one of those myself I can relate.

Carroll’s voice is perfect for this style. It’s tough and edgy but has a vulnerable side just like the tunes. It’s not an American Idol voice, but that’s a good thing!

“Six Years Down” is really good. She’s good at showing lots of emotion with the crescendo/decrescendo (a.k.a. soft/loud) thing. Plus it has that very catchy chorus.

I could take each one of these songs and sing (as it were) it’s praises, but that might get boring. So I’ll just say that listen to these songs and really listen. Hear the words, hear the emotion and I think you’ll end up liking every one.