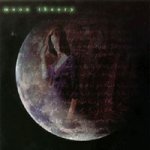 Moon Theory’s self-titled debut took me on a journey to say the least. After hearing it once, Kaeti O’Ghara’s lilting, natural voice was stuck in my mind.

This album is amazing. It’s atmospheric, beautiful, and it rocks simultaneously. My personal favorites include “Insomnia”, a great opening track that rocks, while allowing Kaeti’s vocals to shine through right from the beginning. “Thirst No More” would have to be my overall favorite, as the song recalls many different scenes and situations every time I hear it. “Feed Your Master” was another song that immediately caught my attention with its thought-provoking lyrics, while having an overall electronic background.

Vocalist Kaeti O’Ghara and producer TSO left nothing to chance, by crafting each song with careful precision. This is music done well, and done right. Moon Theory gives off a diverse vibe as an album, with club-friendly tendencies, while also providing dreamy, ethereal tracks that explore human emotion and the state that our society is currently in.

I urge all fans of Collide, Kidneythieves, and Garbage, along with all electro-industrial fans in general to check this band out.

Rating: 3 Stars
Comment: Great voice and atmospheric music make this a great album to chill out too. There are a few tracks on the album that don’t quite reach the greatness of thirst no more and hunger but overall i recommend this album.
name: Sat on Thursday, December 1, 2005

Rating: 5 Stars
Comment: I love this band! My friend introduced me to this group and i love the way the words can tangel you into a web of fanticy… I cant wait untill the nexy cd!
name: Scotty on Sunday, November 27, 2005

Rating: 5 Stars
Comment: awsome!! I am listening this album for a while and each time I discover sth new!I love it. And Her voice…I live in Poland, I got this album as a present from my Friend, Its a pity that such a great album is not popular in Europe..Kaeti! Fire Ur manager:D or change promotion company!!
name: Ela on Thursday, September 1, 2005