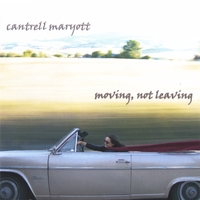 Cantrell Maryott has released a very nice jazzy pop (or is that poppy jazz?) record.

She has a clear smooth voice that at times reminds me of Emmylou Harris, especially on “Carry On” which has some really nice harmonization.

In looking at her web site, she seems a really interesting person. Not only does she put out jazz records, but she also does chanteling. This is described on her site as “…singing the songs of sacred spaces. It is about hearing voice reflected in a room, it is as much the sound of the room as it is the song.” She is also a mixed media artist…sort of sculptures, hard to describe. So clearly a very talented woman. Oh and she co-wrote all the songs on this record. Quite impressive I must say.

The songs are nice, melodic and easy going. This recording is very relaxing.

Stand out songs: “Carry On” and “Three Miles into New Mexico”

Rating: 4 Stars
Comment: Beautiful voice. I listened to her cd several weeks ago playing it repeatedly one bright sunday. for the rest of the week her songs stayed with me particularly the cut Long Way Home.Nice,tight,finely crafted music. The last song On This Morning was very evocative,I felt like I was suspended beneath a jeweled night sky. I look forward to her next cd.
name: T. Wolf McArdle on Friday, March 10, 2006

Rating: 5 Stars
Comment: The first time I heard “Amelie” I cried. Every time I hear it now, it’s like running into a dear friend I haven’t seen in several years.Magic.
name: Rome Hamner on Sunday, March 12, 2006

Track Listing
Listen to track samples
1. Do You Remember
2. Carry On
3. Amelie
4. Fire in the Heart
5. Three Miles into New Mexico
6. Long Way Home
7. Forever
8. Home
9. On This Morning