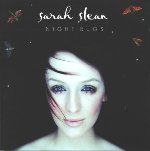 Disclaimer: First I’ll just say that this is a semi-biased review because I absolutely LOVE Sarah Slean. I’ve been on board with her for a long time. Ever since I fell in love with her music upon hearing “Twin Moon” (downloaded from her website) back in 1998. Everything I heard after that drew me in even more.

I was lucky enough to catch her before she got so well-known and I hosted a Living Room show at my home in Minneapolis, MN eaturing Ms. Slean and another fabulous artist, Tory Cassis. So I have a bit of a connection to Sarah. That being said…

After releasing one EP and one full-length CD independently (and the aforementioned EP by Atlantic), Sarah brings us “Night Bugs” her first full length CD released by a major label (Atlantic).

This really is a fabulous CD. The song “Weight” was a long time favorite (originally released on “Universe” her first EP) but this version just blew me away. Her beautiful piano is still there but supported by an amazing combination of synth, bass, vibraphone, cello, bass, drums, Wurlitzer and acoustic guitar. Too much, you might say? Not at all. It’s beautiful, powerful and moving.

I won’t go into detail on every song but I must highlight a few of my favorites: “Book Smart, Street Stupid” is one I’d heard before but in bootleg form (I respected Sarah’s wishes that I not record our living room show, but I never promised I wouldn’t download boots from Napster that other people made). I’ll say it’s so much better without the person coughing into the mic. It’s really a pretty song and this might be where she got the “drunken cabaret singer” label. When she sings,

Another favorite for me is “I’m a Thief”. I’d not heard this one before and it’s a beautiful, haunting dirge-like march that reminds me of Portishead a little. Her voice shines and shimmers.

“Bank Accounts” is a great driving song as I realized today. I nearly went off the road as I was having so much fun singing along to this one (I know I was speeding too). If this one doesn’t make her an international star nothing will. And the fact that the “foreward thinking” folks at Atlantic have decided not to release this CD in America I’m afraid it might not be in the stars for her.

But do yourself a favor and pick up this CD if you are in Canada or order it online at www.hmv.com

5 Stars
Her voice is amazing, her skills as a pianst amazing, what else can I say? A beautiful character in every aspect of the word.