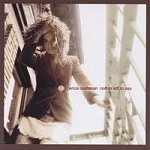 Erica Cashman’s debut has plenty of melodic hooks and radio-friendly songs. “Just Love” is catchy and poppy with a sassy lead vocal. “Nothin Left to Say” is a reflective song with a heart-tugging lyric about a failed relationship.

“Radio Song” is just that but in a good way. Cashman’s pop sensibility is strong and the melody irresistible. Her honeyed vocal is just fine.

“Run” is a pensive ballad with an attractive string arrangement. The heavier “MF” rocks as Cashman puts a guy in his place. Its darker almost industrial throb is appealing.

The closing “Watchtower” is a nice little song.

Rating: 5 Stars
Comment: I was humming tracks from this album in the shower for weeks. Erica’s also great on stage, so do try to catch a show in NYC if you’re in town.
name: Ryan on Saturday, November 20, 2004