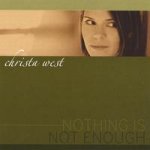 Seattle Native (now in LA) Christa West has released a very nice debut CD. She’s on the jazzy side of pop. Her deep smooth voice is very comfortable and makes you want to sing along. Reminiscent of early Natalie Merchant minus the mush-mouth thing (don’t get me wrong, I love Merchant’s voice…she just tends to slur a little).

The songwriting is far from the ordinary. The melodies take great little turns and the lyrics are smart and heartwarming.

She’s been compared to Jewel and Norah Jones. I have to say I don’t see either of those, I only hear Merchant, but the Jones thing must be because she’s a tad jazzy. Either way you look at it, she’s really good. If you like pop with a touch of jazz check out Christa West.

Stand out songs: “Just Drive”, “Far From Home” and “Heaven”

Rating: 1 Star
Comment: If you like cliche lyrics and melodies – if you wish there was more music out there that blended into the bland backdrop of soft jazz vocal pop, then go buy this album. If you’re looking for innovative, dynamic, engrossing, and melodies with depth, then look elsewhere. There’s a lot of wonderful music out there, but Ms. West still has a little ways to go.
name: Ty on Tuesday, November 1, 2005
Ed.Note: OUCH! I liked it!

Rating: 4 Stars
Comment: great debut full of moving vocals. i only wish i could spin it on vinyl on those lazy, rainy days around the apartment. buy this record, boys and girls. and keep an eye out for big things from ms. christa in the near future.
name: toddp on Thursday, July 29, 2004