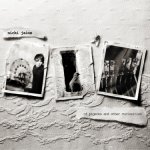 Nicki Jaine is a talented performer who has a deliciously haunting, cabaret-influenced sound. Her solo debut is arresting and places her in the same league as the Dresden Dolls, whom she has played shows with.

“Pretty Faces” is a song that’s both catchy and special. Jaine plays a mean ragtime piano and sings like a true diva.

“Should Have Known” is pretty and skeletal with a delicate piano opening the song.

“Animals Crawling” is a strange and lovely song. Jaine sings in a tone that reminds me of Jill Tracy.

The dramatic “Octopi” is another standout as Jaine sings of being stalked by the eponymous creatures. The songs staccato rhythm makes it odd, but compelling.

“Disaster, You’re beautiful” is an apt title for a remarkable song. Jaine exploits its drama well.

“Untitled” is doomed romanticism of the loveliest kind.

…sings Jaine to a minimalistic backing. But whose world is she referring to? The big one or the small one occupied by lovers on the verge of leaving each other? It’s not clear but the song is great all the same.

This album is a strange and beautiful thing walk on the weirder side. Give it a spin if you like great and adventurous music.