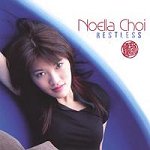 Noella Choi’s first solo release, but that doesn’t mean she’s new to the music scene. After graduating from college (with honors) the Toronto native spent some time in Hong Kong working as the musical director for a Hong Kong television station where she worked on a sitcom called “Virtues of Harmony” as well as composing and singing for television commercials.

“Restless” is a true DIY project. She wrote, performed, recorded and mixed all the songs here. The result is a lovely adult pop sound.

Choi’s voice is pretty and pleasing without being sugary sweet. The songs are inoffensive smooth melodic pop. Nothing wild and crazy, but pleasant all the same.

She alternates playing guitar and piano and I, of course, prefer the piano pieces, but they’re all good songs. She claims she’s not a great lyricist and it took her a long time to come up with words to her music, but I think they go together very nicely, You’d never know it was difficult for her.

Noella Choi obviously a talented woman, and if you like adult contemporary pop you need to check her out.