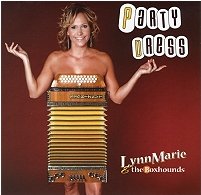 Ok first of all…POLKA! I didn’t know anyone under the age of 80 was doing polka anymore. Maybe it’s a geographical thing, not a lot of polka here in Minneapolis (except at Nye’s Polonaise Room and like I said, they’re over 80).

This record is really different from what us usually submitted to this site. It doesn’t really qualify for review here since the songs are not written by the female featured (unless she is L.Rink in which case she co-wrote a few songs). But I’m so charmed by her that I thought I’d write it up anyway.

She’s adorable and has a fun voice that matches the music well. She’s put out tons of records, has been nominated for 4 Grammys and even has an aerobic instruction video. Who knew? I just read her blog in which she explains her take on the Grammys and polka music in general. Really interesting. Take a look (go to her site and click on Journals).

There’s a cute song called “That’s What I Like About the North” where she mentions some stuff from my homestead: Mary Tyler Moore, Prince, Vikings etc.

“Squeeze Box” is indeed that old song from The Who that used to make me giggle.

You will recognize “Stuck in the Middle with You” also even though it’s been changed significantly.

Even if you don’t think you like polka you should give this one a listen because some of the songs would be good for parties.