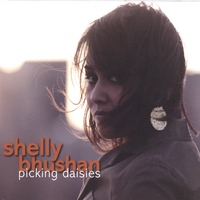 I reviewed Bhushan’s previous release, The Shelly Show in 2005. My main complaint about that one was that it was too short! So it’s nice to get a full-length release now.

At the time I noted that the songs I liked the least were the really bluesy ones, which makes sense since I am not generally a fan of blues. But I find I am liking the bluesy tunes on this record more. Which is good because there are more of them.

The album in general is quite R&B, very polished and slick. But I also hear a little Bonnie Raitt at times. It seems the songs on the first portion are a little more gutsy and the last half is mellower.

The title track, Picking Daisies, is a great piano number. Her voice is showcased nicely here too.

Not to Me is a piano ballad, so you know I like this one best! (I am so predictable). But it really is a good song. Her voice really shines.

In all this album is more urban and soulful than what I am used to, but I think Shelly Bhushan is fantastic. So if you like that genre, you can’t go wrong with this album.