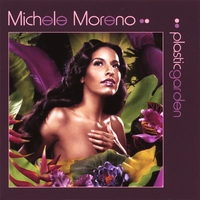 I’m having a hard time classifying this record. Sometimes it sounds like mainstream pop, other times it’s rock, then there’s also some electronica and a touch of world music too.

I guess this is a good thing, though it may be hard to market. But I like it.

I especially like “Dandelion”. It’s haunting and makes great use of dissonant sounds plus has a little Spanish feel to it. Really interesting.

Her voice is lovely. It’s powerful yet feminine and matches the music nicely. At times (like on Trippin) it reminds me of another artist called Anny. The music is dreamy and well written. For my ears, it’s a little too vocal to be classified as ambient. I guess I mean that the vocals are really prominent where with most ambient stuff the vocals are just one more instrument which gets equal time as the rest of the instruments. That’s neither good nor bad. I’m just sayin’..she has been called ambient, and I guess the music portion is, but it’s also very vocally oriented.

Another stand out song for me is “Nothing”.

If you like that sort of trip hop, electronic sound you should definitely give this one a listen.

Interesting note: In 2002 she toured with Ray Charles…yes THAT Ray Charles… as one of his Raelettes. How cool is that?!