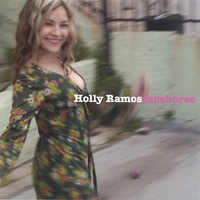 Holly Ramos has a voice that is pretty distinct and because if that, I can’t say that it will appeal to everyone. It’s kind of girly. I happen to like it very much.

I guess this would be in the pop category, but it’s not really pop because that conjures up some other (ahem) “artists” that Ramos is nothing like. Let’s say it’s intelligent pop with a little folksy thrown in. These are really good melodies.

Her lyrics are very well written too. I just wish she’d included them in the liner notes because these songs are really sing-along-able.

The opening song, Thinking About You is an ode to depression. All about stewing in your own stuff, unable to get a move on. I think we’ve all been there.

The only thing I would say it that some of these songs I keep waiting for the “band” to kick in and make the crescendo and it doesn’t happen. It doesn’t have to be a band, but it feels like the songs are just waiting to take off and fly but they just keep the same feeling without expanding. But they’re still really good. And this does happen on some songs, it just feels like there are others in which it is missing. But perhaps that’s just me.

In all this is a very strong record and I think it will appeal to many. It’s well written and very professional.