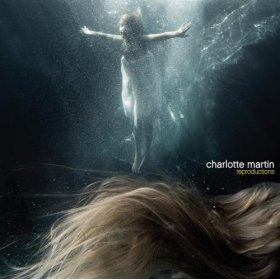 I don’t normally review “cover” albums. I tend to focus mostly on original material written by the artist performing it. But I am the boss of me I get to change the rules. Plus, it’s Charlotte Martin, I mean, come on!

It’s no secret how much I love her music (and she’s a pretty fantastic person too) so I’m sure it will come as no surprise that I really like this record.

I have to admit I did not already know all the songs here. When I saw that the first song was called Angel I thought, ‘oh I do hope this is not a cover of the Sarah McLachlan one. That is sooooo overdone.’ It’s not, in fact I didn’t know it at all. But it’s cool of course with all the CharMar touches. It’s originally done by Massive Attack.

Her version of Constant Craving (kd lang) is really very nice. It’s a great song and sounds just as good with the addition of musical toys as it does in it’s original form.

I’ve expressed my sadness of the way this was released previously, so I won’t get it into it here. But I will say that by getting it in hard copy form, I miss out on her cover of Terami Hirsch’s Mission to the Moon, which I have been anxious to hear since Terami first told me it exists. But at least I have a record to hold in my hand and listen to and it’s wonderful so I’m not going to complain too much!

She does an old favorite, Bizarre Love Triangle (New Order) and gives it a new spin which is refreshing. It’s a great old song, but sooooo ’80s. This gives it a nice update.

I have always loved the Sinead O’Conner song, I Am Stretched Out on Your Grave and it’s even cooler with all the extra ‘bells and whistles’, as it were. Very cool and eerie.

This is a really nice album of great cover songs, some you know and love, some may be new to you.

Track Listing
1. Angel
2. Obstacle 1
3. Constant Craving
4. Elderly Woman Behind the Counter in a Small Town
5. Chocolate
6. Bizarre Love Triangle
7. Cherry-Coloured Funk
8. I Am Stretched Out On Your Grave
9. Urge for Going
10. Just Like Heaven
11. Song to the Siren