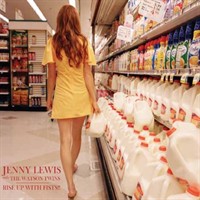 Dreamy waves of caressing guitars and laid back vocals wash over this down in the mouth tale of woe, as this Rilo Kiley starlet with help from The Watson twins, peers into the life of the downtrodden. The hymn like style, at times, gives Jenny an omnipotent feel and makes her observations compelling.

The aptly titled non-album B-side; ‘Paradise’ is a country fuelled trembler, whereby Lewis uses her soft and soothing voice to create a musical utopia. The topic matter of escaping from debt is yet another example of the trials of life being judged by a thoughtful and philosophical muso. Worldly pondering has never sounded so alluring.