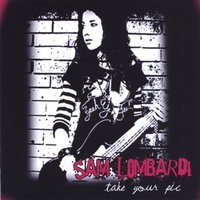 Well the first thing that blew me away about Sam Lombardi is that she’s 16 freaking years old! Hello! She sounds much more mature than that. She’s from Melbourne, Australia and has been singing all her (short) life. She first performed in front of an audience at the age of 9 so she’s almost an old veteran by now.

This record is made up of songs mostly written by others, but she did co-write four of the songs, so I’m going to go ahead and say she qualifies for this site.

The songs are really pretty good. I’m not usually a fan of rock quite this hard, but it’s done very well. The black and red packaging makes one expect punk, but it’s more complex than that. Not that there is anything wrong with punk music, don’t anyone send nasty letters. It’s just that punk is not generally known as a real complex, intellectual style of music.

The songs on “Take Your Pic” have a certain depth that is sometimes lacking in rock music today, especially that put out by teenagers. This is no Ashley Simpson. This is really good stuff. Well-written songs, great vocals and professional musicianship. The only thing is, I’d like to see her write more of her own stuff in the future.

Note: here’s something interesting, while choosing my favorites, I made it a point to not look at which songs she wrote and which ones she did not. I did not want to be swayed in either direction. I ended up choosing all songs she did co-write. This tells me that she’s quite talented…or at least* I *like her!

Stand out songs: “Moment In Time”, “Ordinary Day”, and “Open Your Eyes”

Rating: 5 Stars
Comment: Hey everyone, My names Caitie and I love this album, I think that Sam is soooo very talented and I cant wait to hear more from her. Thank you so much for writing this review.
name: Caitie on Saturday, February 25, 2006

← Album Review: Rise Up With Fists (Single) by Jenny Lewis with The Watson Twins
Album Review: Outside Casa by Laguna! →