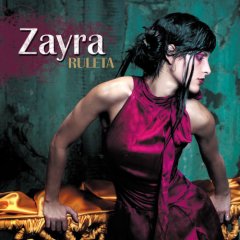 For those of you with no TV or not up on your pop culture (what’s wrong with you?) Zayra Alvarez was a contestant on the show Rockstar: Supernova. It is a reality show/contest where this band, Supernova (made up of a bunch of guys from crappy old bands…OK the ‘crappy’ part, is my opinion, just never got into those bands) and they’re looking for a lead singer. This is the second season of this show; last year it was INXS looking for a new singer. I was addicted to that one as well.

I gave Zayra (for some reason, pronounced Sy-EEE-ta) a little bit of flack in my first writing about the Rockstar show. She seemed all flash and little substance, but I had to admit, she was a blast to watch. She wore very funky/sexy/daring costumes, whacked out her hair and wailed like a banshee. She was, by far, the most entertaining contestant But alas, she was given the boot.

Shortly after said boot, she released an album. How did I know this? Well, I joined her mailing list of course. I offered to review it and they sent me a copy.

I just learned that this album was actually released in 2004 with a much less flashy cover and different track listing (so to me, it’s a different album, but whatever) .

Zayra has a very interesting voice. Its like Bjork, mixed with Deloris O’Reardon (Cranberries) but with a Puerto Rican accent. It sounds great when the song is right for her.

The first track has a bit of a J.Lo feel to it. So if you know me at all, you know it means I can take it or leave it. But it gets better.

“This Is Love” reminds me of Jill Tracy but with a more electronic beat. Many of these songs would work nicely in a club atmosphere. But I tend to like the mellower pop stuff like “So Long” and “Forever”. All in all a nice record and I wish only the best for Zayra. She entertained me for a good portion of the summer!