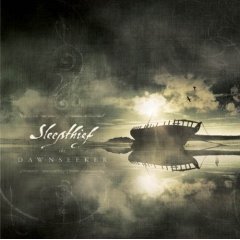 Sleepthief is similar to Delerium in the way that they are a band that uses a rotating series of various female vocalists on their songs. However when I say “band” I mean “man”. Without the female vocalists, Sleepthief is Justin Elswick, a lawyer by day and musical genius by night. Go read his bio on his site, it’s fascinating!

Sleepthief are what I consider ambient/atmospheric music. Techno-pop, dreamy soundscapes then these lovely voices floating (sometimes more than that) over the whole thing. It’s just lovely.

I don’t even know if I can pick out favorites because honest to Pete, I like them all. (yes I said ‘honest to Pete’, got a problem with that?).

But I will say that when I heard “Fire From Heaven” I wracked my brain trying to figure out who that voice was. I know it was someone I had heard before, even owned music of, yet I could not place it. Even the name was not familiar: Roberta Carter Harrison? So I Googled her and sure enough, she’s from the Wild Strawberries, who’s record, Quiver, I listened to an insane amount when it came out. Not sure why I never knew her name. Anyway, that’s a great track.

I also am particular to The Chauffeur. Originally a Duran Duran song, I first became familiar with hit when I heard Beth Amsel cover it. This is a great version as well.

Desire of Ages (Harland) reminds me a lot of a band that seems to have disappeared, KinZaZa. Great stuff.

All of these songs are a hit with me and I’m sure this record will be in my regular rotation for a long time.

Rating: 5 Stars
Comment: This is a MAJOR fav in my CD collection of late! Justin is an amazingly talented musician and I have to say is pretty easy on the eyes as well!! Picking up this CD is not just awesome for the sounds, but the artwork done in the pull out is amazing as well!! And well I am a bit biased as the artist is a friend, but there are many I know would agree with me! Oh and the covers on this CD are 2 songs that have been long time favorites of mine, by the original groups, Berlin and Duran Duran. But since getting this CD I acutally prefer Justin’s versions of “The Chauffeur” and “The Metro” now, over the originals!
name: Kristin “Krissy” Chadwick on Thursday, September 21, 2006