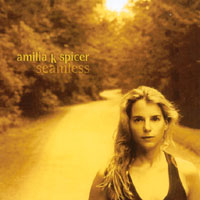 Amilia K. Spicer began her entertainment career as a film director. My cyber sleuthing tells me the film was called “Last Breeze of Summer” and was actually nominated for an Oscar in 1991.

Well I didn’t see the film, so I can’t comment on her (assistant) directing skills, but I can say that she’s very good at the whole singer songwriter thing.

There is a touch of country in some of these songs, which is not my favorite genre, but she has such a nice soothing voice I’m happy to hear her sing anything. The songs are well-written, mostly mellow, folk-ish tunes that showcase her vocals very nicely. The production of the album is first class as well.

If you like alt.country/folk I think you owe it to yourself to check out Amilia K. Spicer.