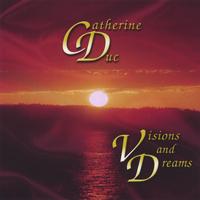 I am one of those people who always sort of sniggered at the idea of the term New Age music. It brought up images of Yanni and John Tesh. However, I always secretly liked Enya. I don’t know if it’s my progressing age, or if it’s just that I’ve heard so many different genres in my musical journey in the last 5 or so years, but this stuff is really growing on me.

I won’t say I’m going to go out and get Yanni’s complete discography, but I am certainly more open to artists like Catherine Duc. If any of you have DirecTV and happen to ever listen to the Soundscapes channel, you may have heard this music there. I can’t confirm for sure that I’ve heard it there, but I’m pretty sure I have. I for one, love to play this type of recording when I’m reading, resting, etc.

This CD is very well done. There are synthesizers, but not the cheesy kind. Everything sounds very lush and professional.

The melodies are refreshing and lovely. The songs range from Celtic to electronica and other realms in between. All the songs have a nice ambient quality.

If you like Enigma, Delirium, and the like, I think you’ll enjoy Catherine Duc as well. It’s perfect mood music for that afternoon or evening of just relaxing.

Catherine Duc, award-winning Australian composer and musician, has won another major award. This time she was chosen from a talented field of thousands of international artists and named ‘Instrumental Artist of The Year’ in the 16th Annual International Los Angeles Music Awards.

Rating: 5 Stars
Comment: Catherine Duc is an awesome musician. She has fought her way to get all her goals, being truth to herself and her music and she’s now gathering the success whe truly deserves it. From my behalf it gets the highest recommendation.
name: Priscilla Hernandez