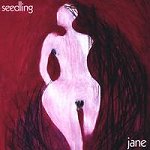 I reviewed Jane’s debut release;”Close Up and Real” about a year ago. That one had a distinct 80s flair to it. This one not so much.

“Seeding” really has a more country feel to it. Particularly the opening track, “Never Thought It Was Love” and particularly at the end of it where there is a harmonica solo.

Some of the tracks have a jazz/AAA feel (“Place to Find You”, “Never To Blame”).

“Show Me Where The Lonely People Go” reminds me of some of those early 90s jazz contemporary bands like Basia. It’s cool, but interesting to me that Jane’s songs still don’t sound all that current.

If you’re OK with older sounding songs (I’m not going to say “retro” I got ripped a new one for saying that about someone else then Jane might just be what you’re looking for.

Track Listing
Listen to track samples
1. Never Thought It Was Love
2. (free) Place to Find You
3. Show Me Where The Lonely People Go
4. Daddy
5. I Wanna Stay Blind
6. Showdown (waiting for a sign)
7. Never To Blame
8. Place to find you (acoustic mix)
9. I See It All Now
10. Seedling