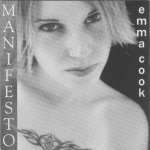 Toronto’s Emma Cook is further proof that there is something in the water in Canada. That country seems to (almost consistently) turn out fantastic musicians.

Her music is in the vein of folk but there’s a rock edge too…and it’s very well done. Her lyrics are very powerful and well written.

“Watch Dog” is a great song from the perspective of a person whose friend is being mistreated by a partner warning him/her to “Go wash up on someone else’s shore.” Great song.

On “The Girl in the Mirror” the guitar lines sounds almost exactly like Tracy Chapman’s “Fast Car”, the lyrics remind me of an Ani DiFranco Song (“Fixing Her Hair”, though it’s not the same exact thing) and her voice sounds like Alanis Morrisette. Now, you could call this derivative, but I’d rather think of it as homage to those great women.

In fact her voice is very similar to Morrisette throughout the entire recording. Maybe not quite as angry, but just as gutsy. It’s very nice.

“Polyester Nails” is a nice gutsy rant that begins a capella, but turns into a funky number with bass guitar, drums and lots of backing vocals.

“Play” is a beautiful folk song that owes a lot to Tracy Chapman again but it really showcases the prettier side of Cook’s voice.

This is a very nice record for those of us who like guitar folk-rock ala the above mentioned artists and intelligent lyrics.