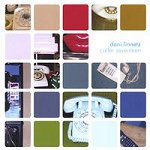 My first copy of this CD was cracked so my anticipation to listen was crushed when I first received this. But I have my replacement disk and am very pleased.

I reviewed Dani Linnetz’ CD, “The Milk” almost exactly one year ago and I really liked it. I like this one as well, but it’s got a little different feel.

At that time I had compared her to two other artists, Anne Deming and Triangle Park. This release sounds like neither of them to me. Opening track, “The Library” is much more rock than her previous stuff. But several of the other songs sound a little more like her first CD.

She has a easy comfortable voice that is instantly likeable. The music is folky pop with a bit of an Alt Country or Americana feel. The songs are well written catchy and interesting without being trite pop (which is a feat in itself).

Favorite songs: “In Response” love the tempo changes; and “Would You Promise” has a great rock sound, but I also like “Like to Lose” a lot. Really they’re all good.

If you liked “The Milk” you’ll love this. If you’re new to Dani Linnetz this will turn you into a fan. Check them out via the CD Baby links to the left.

Rating: 5 Stars
Comment: I loooove Dani. I saw her in Austin and have been a huge fan ever since. Would You Promise is my favorite track off the new album.
name: Gary Reese Submitted Tuesday, June 1, 2004

Rating: 5 Stars
Comment: I saw Dani perform a couple months ago in New Orleans and bought Caller Seventeen. This CD is awesome. It’s not what you expect when you see her solo live show, but it blew me away. Get it now!
name: Michelle Citrine Submitted Tuesday, June 1, 2004