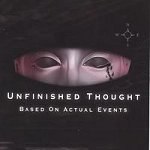 I think I’ve done it again. I’ve come across another shiny gem in the vast world of independent music. Dark Rock duo Unfinished Thought have just released their second album “Based On Actual Events”, and it is nothing less than extraordinary.

Vocalist and pianist Stacey Nelson and Producer Joe Kiser merge their talents together and create a compelling, layered sound. This album is very diverse.

The opening track “Through Crowded Rooms” immediately grabs the listener with its fast-pace and honest lyrics.

Another stand-out track is “Umbrella”, an emotionally charged song with Stacey on the piano. The chilling piano wraps around Stacey’s words “It’s sad when the rain falls and it makes no sound, when it falls out of order, when you’re not around.” UT also shot a video for the song, which is available on DVD or on their website. “The video was something that we had always wanted to do, but we had thought it was completely out of our budget range. We were still interested so we plastered Michigan State University with flyers looking for a film student to help us out. We got a call from a senior film student (Ara Howrani – the director) and it turns out he had an entire crew working with him. We picked”Umbrella” because we had access to a beautiful house with a baby grand for Stacey to play and the Michigan State University students gave us access to a mental hospital and some other creepy sets like those great woods,” said Kiser in regards to the video.

Unfinished Thought do an excellent job of combining layered music with amazing vocals and lyrics. They seek to bring the listener a story of “never ending sleep, of forever deepening concern, and of unavoidable consequences.”

It is true, as “Based On Actual Events” takes the listener on an emotional roller coaster ride. Fans of Garbage, Kidneythieves, and Lacuna Coil should definitely take notice, as I believe that this is definitely a band to watch.

While their music is primarily described as “Goth/Industrial”, Joe Kiser feels that UT’s music retains its own signature style while shifting from soft ballads to harder, more aggressive songs. “We struggled in the beginning to find our own sound,” he explains. “Halfway through the first album we caught on to our own style, we recorded what felt natural. I think that’s the definition of a musical style.”

Track Listing
Listen to track samples
1. Through Crowded Rooms
2. Sidewalks
3. By The Time You Read This
4. Umbrella
5. Probabilities
6. Evening
7. Don’t Stop Raindrop
8. The Order Of Detail
9. Perfectly Still
10. The Timid
11. Silhouette
12. Coming Back