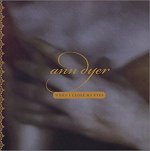 Jazz singer Ann Dyer has made a rich, fascinating album with “When I Close My Eyes”.

She interprets Elysian Fields sensual masterpiece “Mermaid” and Björk’s “Bachelorette” in stunning fashion. Elsewhere we get an Emily Dickinson poem set to music by Dyer.

She’s certainly eclectic and not afraid to experiment. The result sound based as much on an Indian as a western tradition.

This is mostly a stripped-down, intimate-sounding record. Dyer lets her voice roam freely. Her own songs like “Underworld” have a charm too. “I dream of drowning, but I’m still breathing. A warm tide draws me into the deep” she sings and returns to the aqueous themes of “Mermaid”. Its touches like that that makes this album shine. Dyer intones the words as seductively as she can.

It’s an album that will reach its core audience and maybe convert a few non-believers too.