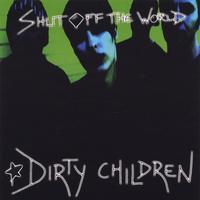 In the mood for some 80s-style punk? Then you need to check out Dirty Children.

The group, consisting of Nadia Fay (lead singer) and Jay Condiotti (lead guitarist) has got this genre down pat. I kind of feel like I’m jumping around my dorm room with a plastic cup of beer in my hand and a sneer on my face. Ah, nostalgia.

Yet the music still feels fresh. Nadia Fay’s voice is perfect for this style of music. She growls and wails like the best of ’em. Jay Condiotti plays a mean guitar.

They have unusually intelligent and involved lyrics for a punky band. I mean, The Ramones were great, but not exactly wordsmiths, you know?

I also like how they’re able to rock out like crazy as well as take it down a notch (or three) on some tunes that almost resemble ballads (until they explode) and they pull them off equally as well.

A fantastic party CD, all around!

Stand out songs: “God Got In The Way” has intriguing lyrics and great sound (little distortion on vocals, etc), “Keep Running” really shows off Fay’s vocal capability and their cover of Sheila E.’s “Glamorous Life” is great!