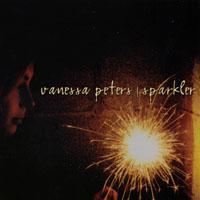 Austin’s Vanessa Peters has released a really nice album. I guess the genre would be folk/pop but not the kind of pop that’s fluffy or trite. I only say “pop” because folk/rock makes me think Ani DiFranco and this is not that. This is more Adult Alternative (with a tiny twinge of Americana). Think more Shawn Colvin, Dar Williams… Anyway, it’s good.

The songs are well-written with nice melodies and instrumentation. Vanessa’s voice is friendly familiar yet unique. She really doesn’t sound like anyone else I can think of.

I love that in the credits it credits a couple of people who played the “cognac glass”.

“Hooked” has a different rhythm that separates it form the other songs.

Other stand out songs are “Rather Bad Day” and “Wait for Me” which has some really pretty finger-picking.

“Sparkler” is a debut worthy of attention.

← Album Review: 22 Mountains by Danielle Lo Presti and the Masses
Album Review: The Trouble with Success… by Paula Kelley →