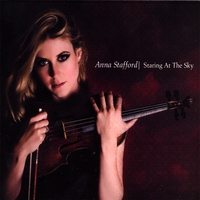 Review by Amy Lotsberg Producer of Collected Sounds
I reviewed Anna Stafford’s release, String Music at the end of last year and here she is out with another already!

I had stated at the time, that while it was nice, I felt the songs could be more fleshed out with a whole orchestra (or digital one, I’m not picky). So I was hoping to hear that here. But it’s still just she and her husband John Krovoza on the cello. They do sound lovely together.

It’s an odd concept to hear rock violin, but I’m telling you, it works. She’s a fantastic player. It seems like her fingers are just ripping through those strings. I would love to see her live.

I’m actually pretty blown away by her she is not only a great musician; she composes, produces, and engineers all her records herself. I’m going to give this more ear time, but for now I’ll say it’s really quite amazing.

Track Listing
Listen to track samples while you read
1 Youth and Meaningless
2 Everything Black
3 Staring At the Sky
4 Arizona Washington
5 On An Airplane
6 Today’s Saturday
7 Many Thoughts
8 Oklahoma California
9 In the Back of My Head
10 Dance, Dance
11 Crazy in October