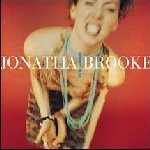 Although I pre-ordered the CD and DVD of “Steady Pull” I only received the CD in today’s mail. A note promised the DVD will be delayed a bit. Maybe by the time it gets here I will be a little more accustomed to the new album. It’s going to take me a while to feel comfortable with this one.

The album begins with “Linger,” a bright tune featuring characteristic Jonatha vocals. You know, dotted with all those little nuances she has perfected. Some tasteful piano tracks are overshadowed by a droning electric guitar, which may have been added to affect a more complex arrangement but to me only detracts from this pleasant melody. “How Deep Is Your Love,” the next song, is quite a departure from standard Jonatha fare. Underscored with a hip-hop type beat, far-away vocals processed through an echo chamber/reverb unit, and the ever-present electro/techno accompaniment, this is a far far cry from the folk days of “The Story.” The next track, “Walking,” tries to rely on various studio electronica to maintain a continuity but stumbles throughout. An uninspired vocal track doesn’t help either.

The album takes a turn for the better about halfway through. “Room in My Heart” is a great song with a fascinating jazzy chordal progression, but the addition of many electronic instrumental layers tosses in a measure of disjointedness. Still, this is good stuff. The title track, “Steady Pull,” features brilliant perfectly-on-pitch vocals and is the only song on the CD with a memorable bridge. These bridges are one of Jo’s trademarks. Think back to “Because I Told You So.” Or the song “10 Cent Wings.” Sigh. Now *those* are musical bridges!

“New Dress” sets a mood and builds up the drama. The production on this one is much more finely crafted than some of the other songs on this album and it shows. “Digging” is beautiful in its simplicity. The guitar parts are slightly chaotic at times but only add to the overall presentation. This is a fantastic song, given a wonderful treatment.

“I’ll Take It From Here” is easily my favorite. A gorgeous flowing piece. The producer finally allows the instruments to complement instead of clash and overpower. The balance of Jo’s vocals and this “less is more” approach to the arrangement is masterful. Concluding the CD is “Lullaby,” a haunting acoustic ballad which is a stark contrast to much of what preceded it.

Jonatha expands her artistic horizon with each new album. A lot of my admiration of her music is due to her uncompromising attitude and her quest for growth as a singer and songwriter. It’s usually a most pleasant surprise to discover where she has gone each time. With “Steady Pull” I feel the producer has been given too much reign and has relegated her contributions to somewhere further down in the mix. By that I mean the electronica layers have grown too big and detract from the clean yet dissonant and complex presentation that is uniquely Jonatha Brooke. Give me Duke Levine any day for a tasteful accompanist who skillfully augments the songs with neat little riffs instead of banging away with barre chords. Players like him who know their places, and who let Jonatha’s talents shine and stand on their own, should be coveted.

On first few listens, it didn’t have the love at first listen qualities that Ten Cent Wings did. Linger is a very good song, Room in My Heart is very catchy, but the other songs are going to require multiple listens to get inside them…Lullaby in a strange way reminds me of the song Ten Cent Wings. The French version of How Deep is Your Love is an interesting counterpoint to the English version. I was curious as to why the last bonus track was co produced by Alain Mallet–was that from before they split?

This doesn’t sound like a new direction for her, which is fine, I liked her old direction just fine—actually, I am reminded more of Plumb than of Ten Cent Wings….