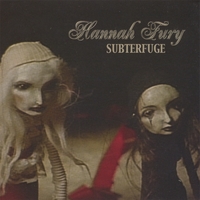 There’s something about Hannah Fury’s music that transports me. It’s just so dreamy and magical. Simply (or not so simply) beautiful.

These songs are layered lush masterpieces, every single one of them. There’s so much going on here I feel like I have to listen over and over and very loudly (or with headphones) just to hear even half of it.

She reminds me a great deal of Kate Bush. But more in looks and behavior than in sound. While Kate’s voice tends to be a little screetchy at times (don’t yell at me, I do like her), Hannah’s is a soft, sexy, dreamy whisper.

This record has lovely extra. The second disc is a DVD of the song “Carnival Justice (The Gloves Are Off) Part II”. Let me just say the video is stunning. I watched it three times in a row. It was like I couldn’t stop. There is something both creepy and wonderful about those puppets that are mesmerizing (that’s them on the cover art). I love things that are beautiful and a bit scary at the same time and this whole record, but especially the video, is one of those things.

“My Next Victim” is a favorite. But really all these songs are wonderful. I wish there were more! The EP could stand along, but because this comes with a DVD, this is more than worth the price of the package. Get this now, you won’t regret it.

Track Listing
Listen to track samples
1. You Showed Me
2. Je T’aime
3. My Next Victim
4. Carnival Justice (The Gloves Are Off) Part II
5. Girls That Glitter Love the Dark
6. A Latch to Open