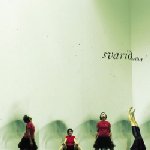 Icelandic artist Heida used to be in a band called Unun who recorded in English, but for her solo debut she sings in her native tongue.
The music is experimental, but still accessible and Heida’s vocals take center stage. Its hard not to think of Bjork when hearing Heida’s accent. There’s also a Bjorkish playfulness in the darting between musical styles. The punky “Loftborg” sits next to the indie-poppy “Silvur” and the ballad “103.mars.”

This makes “Svarid” a daring adventure for those souls who have grown tired of top 40 fare.

Lets hope Heida can cross over like certain other artists from her homeland has.