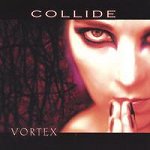 Industrial duo Collide has recently released an otherworldly double disc remix album. If you are familiar with Collide at all, then you know what I’m talking about. When kaRIN and Statik announced an open remix call, looking for remixes to feature on this highly-anticipated album, they received many responses, leading them to handpick a diverse blend of songs that range from addictive club mixes to dreamy, dark, and mellow songs.

Vortex not only features 2 CD’s of creative mixes, but Collide ventured even further into the vortex by releasing a few cover songs, including their fast paced version of “Feed Me to the Lions”, (Adam and the Ants) “The Lunatics Have Taken over the Asylum”, (Funboy 3), and “Haunted When the Minutes Drag” (Love and Rockets)

My favorites include the “AntiStatic” mix of “Like You Want to Believe”, as it’s a harder, more rock take on an already great song. Charlie Clouser’s “Emirian Mix” of “Euphoria” is also one of the most captivating. kaRIN’s vocals are as stunning as ever, and each song holds an identity of its own, providing a different, interesting view on each song. Also featured is Collide’s mix of “Predator” (Frontline Assembly)

Vortex has more than enough remixes to satisfy any fan as well as people that are just becoming aware of the music. With impressive new artwork featuring Matthew Cooke and Chad Michael Ward, Vortex as a whole is truly unique. No one does it better than Collide, and this collection will definitely do its job in holding fans over until the next full-length treasure from Collide.