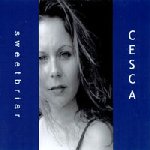 Cesca Waterfield’s music is a combination of folk and blues. Simple in the fact that it is just her guitar and her powerful voice…complex because of the lyrics and the talent evident in her playing and vocals.

She begins the CD with Islington Road, a little ditty about…oh…sibling rivalry, cheating and revenge in the form of murder:

When there’s a score to be settled, blood looks the same
What does it matter that her daddy and mine are the same?
and we both came up hardscrabble down on Islington Road
cuz she won’t be calling me sister no more

In “Riley” she takes on abuse:

Riley learned as a tiny boy, love can fade but pain is loyal
Feeding on the family tree, rage grows up from the soil

These songs all have a touch of darkness, but they’re so well written and performed that it’s not depressing at all.

She is currently working on a new CD and I look forward to hearing more of Cesca.