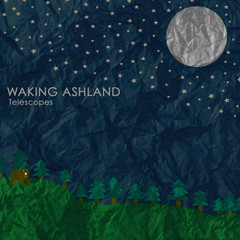 Well, if you know me, you know I love me some piano pop. You also know I’m going to love this band when the lead singer/pianist Jonathan Jones mentions Billy Joel in his bio. Not only does he have great taste in music, his voice is heart melting and his piano playing is lovely. *sigh*.

The other member of the band is Ryan Lallier on Guitar and Vocals. I am not sure who I would compare these guys to. I’m sure there’s some popular band that is played on the radio that is similar, but since I don’t listen to commercial radio much I can’t make an educated comparison.

Maybe whoever sings that “I’m 23 for a moment…” song. That’s Five for Fighting right? See, I’m not a total loser. Let’s say him mixed with Ben Folds Five (and I even know that Five for Fighting is mainly only one person). I’m starting to sense a pattern of bands that play piano and whose name indicates that there are 5 members but there are not. But I digress…

Waking Ashland has put out a very nice record, albeit short. At 7 songs, it’s longer than a standard EP, but a tad shorter than a full length. Whatever you want to call it, it’s a great record and if you like piano driven pop you’ve got to get your hands on this.