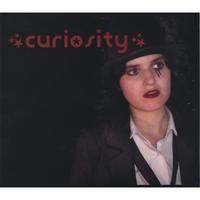 The young woman who calls herself Curiosity Valentine has made a fascinating debut album. She has a thank you list with the headline “people I don’t want to kill”. That’s called attitude. She adds in the liner notes “And the rest will get what’s coming to you”.

The music is accordingly harsh, but not without melodies. “Play with Us” is a Danny Elfman-like tune with a Nine Inch Nails style.

“Continental Razorblade” has a pretty dark lyric, but the singer’s vocal skill is impressive.

“Teardrinking” tries to be a traditional ballad, but soon gives it up and collapses under the weight of the abrasive singing. Curiosity Valentine doesn’t seem to be in line to sell out any day soon.

“The Forced Magician” barely crosses the half-hour mark, but it seem to have enough ideas and attitude to last a long time.