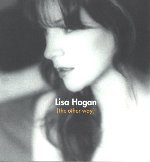 In almost every review that came with the CD there was a comparison to Sarah McLachlan. I don’t see it. But as much as I love Sarah, that’s not a bad thing. I think there are only a few that can be compared with Sarah (Sarah Slean before she became a drunk cabaret singer and Tara MacLean) but that doesn’t mean that Lisa Hogan isn’t great in her own right. She just sounds nothing like Sarah M to me. Where Sarah sings of “chairs, candles and cloths” Lisa sings of cigarettes, taxicabs, and sex.

This CD would probably qualify as jazzy-pop. Maybe I just think that because of the horns which add nice touches on “I Go Down” and “Me and My Jones” which is an ode to an addiction.

“I Say Nothing” is probably the song that makes most reviewers say, “Ah, Sarah McLachlan.” It’s got a beautiful piano part and her voice glides over that. But that would be where the similarities end.

“My Friends Call Me Rae” is a nice upbeat song complete with soaring horns.

This is another one of those artists that is very nice to listen to on CD but I bet live, she kicks some ass.