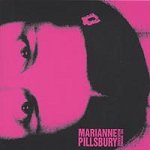 My first impression was that Marianne Pillsbury reminds me of “pre-Avril” Liz Phair (as in when she was still really good) but with more humor. (I swear, I made that comparison on my own, it’s only now after reading more about her I realize there are several others who have seen this likeness as well). But that comparison really only holds for the opening track.

The music is fun, punky pop/rock and Pillsbury’s lyrics are intelligent and witty. The instrumentation is well arranged and well performed and matches the whimsical nature of the lyrics very well.

On “Supersize” she sings, “When you say something, it’s more important than anything anyone has ever said, anything that anyone will ever say.
No mere mortal has ever made me feel this way. I want to Supersize you.”

I think we’ve all felt that way about someone at some point in our lives. It reminds me of that great XTC song, “Crush Story”, but this song is great on it’s own merit.

“Boo-Hoo” is currently my favorite song here. It’s a rant to people who complain about their partners from someone who doesn’t currently have one. With lyrics like this, who could resist?

This press kit also came with a little packet of tissues with a “Boo Hoo” sticker on it, which I thought was a very clever touch.

Bonus Track 12 is an adorable sounding little girl singing a song that she probably made up on the spot. I can’t wait to hear her CD in a few years. “I like to play in the snow you see but I like Valentime’s (sic) day much more better…” how cute is that?

I could weigh in with my opinions of why each song is great, but I’ll leave that up to you. Go ahead and buy it, you won’t regret it.

“The Wrong Marianne” sounds like a summer CD to me. One that will be cranked in our backyard in a few months while we barbeque and have drinks. Seeing as there is about 10 feet of snow in the driveway this idea seems too far off but listening to the CD helps! I am really enjoying it and plan to for several months to come before I blast it out in a sharing gesture to the neighborhood this summer.