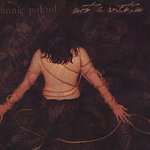 Stephanie Pakrul’s debut is intense and unusually layered music. She’s not afraid of dark themes, in fact she seems to seek them out.

“Daughter of Sam” is a seemingly whimsical song that swiftly turns nasty. Its rapid changes of pace stirs a sense of unease even as Pakrul sings sweetly.

“T.P.E” is a ballad with searing words of betrayal and revenge.

“A Schoolgirl’s Plea” visits the mind of a precocious girl as she chats up a man.

“Anthem for the Perverted” lives up to its title and then some. Its simple melody forms the backdrop for Pakrul’s confession. She acts the part of an unrepentant sinner. “Come inside my dirty mind, you might find you like it” she sings enticingly.

“Not a Victim” is dark and deep. And it just might be your thing.