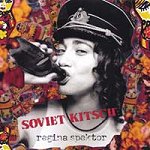 I’ve been a fan of Regina Spektor’s since Anna Maria Stjärnell first reviewed her CD, “Songs”. So I was very excited to see that she had a new CD coming out this year since I was at risk of wearing out the other two previous releases.

Well, I am not disappointed and you won’t be either. Though this one is a little different. It doesn’t seem as quirky upon first listen, but when you get into the songs further you realize that it’s still Regina and her unique way of looking at things…which is what her fans love.

This recording has a little more instrumentation. Whereas the first two consisted mostly of voice, piano and the occasional bass, “Soviet Kitsch” employs more percussion and strings, breaking glass and even a punk band!

But that voice, oh my…thank god it’s still there and those lovely quirky lyrics.

I could take each song and tell you what I love about it, but that would take so long, so I’ll just try and recap my favorites. Though I happen to know from past experience with Ms Spektor’s music that I can listen 3 months later and get something brand new out of a song I’ve heard a hundred times and it then becomes my new favorite. But let’s try this…I’ve only listened about 6 times:

“Sailor Song” of course stands out because of the oft repeated, “Mary Ann’s a Bitch!” It has a gutsy rolling drum beat that adds so much to the song.

Track 7 is Regina and Bear (who I recently learned is her little brother) whispering to each other about the upcoming song. Just a tip, if you go ahead and turn this way up so that you can hear the whispering you may be a little jarred when the song starts and she yells, “DA NA NA NA NA NA NA…” This is a really fu punk-ish song complete with band. Too bad it’s only a titch over 2 minutes. But then again, it’s a punk song and that’s as long as they should be. The Ramones taught us that.

“Us” stands out because of its almost frenetic string arrangement, which gives it a classical feel.

I’m still trying to figure out “Chemo Limo”. It’s about a dream, and if her dreams are any odder than her waking state I don’t know if I’ll ever get it. This to me, is fabulous.

“The Flowers” and “Somedays” are simply beautiful and they really show her piano prowess. Hell, all the songs do really. She’s very talented.

Every time I listen to Regina Spektor I curse myself for giving up the piano and am inspired to pick it up again…if only so I can learn to play some of these songs.

These are all fabulous songs by an artist that deserved way more attention than she’s gotten previously. But perhaps her recent tour supporting The Strokes will help this cause.

If you like clever, witty, intelligent lyrics and music that goes places you don’t expect you owe it to yourself to check out Regina Spektor. If you’re already a fan of her previous work this will make you very happy.