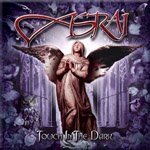 Occasionally, you discover artists and bands that have been around for a long time, but have somehow managed to elude you for all these years. Often times these discoveries are followed by a feeling of “Why didn’t I find this earlier !?”. The same can be said for this CD by Asrai: The band has been around since 1989, but I had never heard of them before seeing them live at a recent festival. They impressed me with their energy and ferociousness, and I decided to buy the CD.

Perhaps missing Asrai for all these years is not so strange; This is only their second album, but it is being promoted as their first full official album, and it was released last year, so I didn’t really have much time to discover them. Still, I have a feeling I missed out on not discovering the band earlier. This CD is one of the gems of recent gothic-metal. Gothic-metal in the past two years, has been revolving very much around the ‘metal’ part and not so much around the ‘gothic’ part. In fact, the only thing that has made some of the current bands ‘gothic’ is the fact that the lead-singer is often an attractive female in a large dress. Perhaps that is what the media has made of what gothic-metal is supposed to be, but that hardly follows the definition of the two terms.

The main reason why this CD differs from other recent albums, is that it not only has it’s roots in metal, but also in the new wave movement of the eighties (The ‘gothic’ part, if you will). That, in combination with the heavy guitars and powerful drums (Thus adding the ‘metal’ part) and the strong vocals of Margriet Mol create a mix that sounds both very passionate and powerful . The vocals are not picture-perfect as they are on some of the recent gothic-metal albums, such as the latest Within Temptation. Instead, the sheer passion in her voice makes up for the occasional error. It adds intensity to the music, which combines well with the strong guitar hooks and the dark lyrics.

Asrai especially excels in providing heavy songs that don’t knock you off your feet, but instead bring you to your feet to dance: The guitars, synthesizers, drums and vocals on tracks such as “Pale Light” and “Restless” are certainly heavy, but they never blow you over. Instead, the rhythm of the songs is remarkably catchy. And in that, Asrai has found a combination that could bring them very far: They can add a charm to this genre of music, that makes it inviting and attractive without losing its edge and that is not something you see in the modern-day gothic-metal bands that seem to revolve more on making the most orchestrated music out there.

This album is not without flaws, though. The lyrics are a bit melodramatic and overdone at times, and I don’t think the band succeeds in providing a good ballad in the track “Tower”. Still, for a CD of only 47 minutes, this is a very impressive piece, and I am certainly looking forward to their next work.

← Album Review: Fresh Wine for the Horses by Rob Dickinson
Album Review: A Girl, Almost… by Far Beyond Frail →