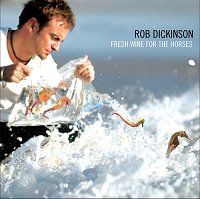 OK I know that this is a site predominantly for women in music, secondarily for independent artists of both genders…but when someone wants to send you a copy of Rob Dickinson’s new debut solo CD for review, you just don’t say no…at least not if you’re me.

Dickinson has been the lead singer for the dark, atmospheric band The Catherine Wheel since 1992. I’ve always had a soft spot for Rob Dickinson’s voice. It’s simply knee weakening. (Doesn’t hurt that he’s easy on the eyeballs as well).

Seems the band has been laying low for the past several years. Upon further investigation found they’ve likely broken up. Though you’d never know so in my home. I have all the CDs and play them regularly.

I have read a few other reviews of this CD and I can’t say I agree with many of them at all. They’re calling this “uncharacteristically safe”, and “faded glory”. BAH! I especially and most whole-heartedly disagree with this one which says the problem is his voice! What?!! WTF?!

Sorry, that’s not what I hear. I hear a Catherine Wheel CD without all the excess noise. I am one that loved Catherine Wheel on record but saw them live many times and was sometimes disappointed. They were too loud, too noisy. There was so much going on and it was so loud you could not pick out anything interesting and most of all could not hear his beautiful voice is the horrid club mixes. So it was CDs for me, where I could turn it up loud (or put headphones on) and really enjoy all the little bits and pieces.

So this is exactly what I was hoping for. These songs are beautiful, well, written and feel very comfortable upon the first listen. By the third or fourth spin, you’re in love.

Though I am not a musician, I can tell you that these guys are very skilled. I’m happy to hear piano here, as if you’re read other reviews of mine, you know I am a piano slut.

Rob Dickinson can play my living room anytime. But for the now, I will just add this to the rotation of CDs I am playing constantly.