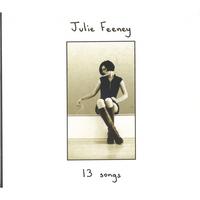 Julie Feeney’s debut starts with the astonishing “Aching”. All strings and sleek vocals sighing in devotion. It instantly had my attention.

“Wind out of my Sails” is a playful little ditty with a nice accordion bit. Feeney’s starry-eyed vocal is inspired.

“You Broke the Magic” is as sad as its lovely. Feeney’s songwriting talent is apparent.

“Wastin” rests on a single chord for long, like some of the other songs do. The effect becomes hypnotic by the power of its simplicity.

Rating: 5 Stars
Comment: You know how you listen to some records and only one or two songs are your favorites? That is not the case with 13 Songs. Julie Feeney has put together an extraordinary album that obviously showcases her talent, but has 13 songs that I love equally. Every last one is rich and beautiful and genius. I first saw her on RTE’s “Other Voices”. I love Rufus and Martha Wainwright, so I had watched this particular episode for their performances. And when I saw Julie Feeney perform “Wind Out of My Sails” and “You Broke the Magic”, I didn’t like it at first. And then I instantly fell in love with it. I ordered her album all the way from the UK because it’s not available here in New York because it was so great. I really do hope that she gains the popularity and respect she deserves.
name: Cara on Sunday, April 2, 2006

Rating: 5 Stars
Comment: Great record, lovely woman. A breath of fresh air to be honest. Check out this album. Even the Cafe Del Mar generation may appreciate this.
name: O Draoi on Monday, February 20, 2006