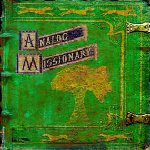 Analog Missionary are fronted by the sweet voiced Anstrom and make gently flowing soundscapes on this CD. Kevin Kaisers’ guitar playing is in harmony with Anstroms singing. It’s alternative rock, but not in the most commonplace way. The group are more varied than that.

“Chaser” has a psychedelic feel and Anstroms vocals sound both relaxed and utterly confident. The song has a sense of unease that’s underscored by Kaisers restless guitars.

“This (cant be happening)” has Anstrom cutting loose vocally while the band play aggressively. The songs words of loss are very moving.

The title track has some disturbing lyrics in:

She is red light she means blood,
she is a killer,
she’s a whore.

The music is rhythmic and fast and it provides a good backdrop to this tale of a femme fatale. Anstrom sounds like a lethal lady herself on this song. The sedate album closer Sundering sea edges into Pink Floyd territory. It’s a great contemporary take on progressive rock.

“Transmitter” is a good debut for a gifted band.