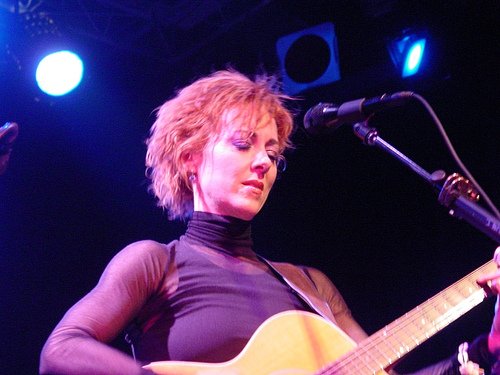 Singer/songwriter/guitarist Jonatha Brooke began issuing albums that merged folk and pop during the early 1990s, first as a member of a female duo named the Story and later as a solo artist. Brooke formed the Story (originally called “Jonatha & Jennifer” during the duo’s early years) along with another vocalist, Jennifer Kimball, who attended Massachusette’s Amherst College with Brooke in the early ’80s. Despite playing regular local gigs during their college career, the girls never issued any recordings and took a break after graduation, during which time Brooke joined a dance troupe. But by the end of the ’80s, the group had re-formed under a new moniker, the Story, and issued a demo called Over Oceans in 1989. The Story was promptly signed to the independent Green Linnet label, which issued the duo’s debut album, Grace in Gravity, in 1991. It wasn’t long before Elektra Records expressed interest in the band, in turn reissuing their debut the same year, as well as a sophomore effort, The Angel in the House, two years later.

By 1994, however, the Story had split up for good and Brooke began pursuing a solo career. Despite Kimball’s absence, Brooke’s 1995 solo debut, Plumb, was nevertheless credited to Jonatha Brooke & the Story. Brooke was the sole creditor beginning with 1997’s 10 Cent Wings, which also marked a shift from her earlier folk-pop material to a more radio-friendly style. This shift continued with such additional releases as 1999’s Live and 2001’s Steady Pull, the latter of which was co-produced by Brooke and renowned studioman Bob Clearmountain (known for his work with Bryan Adams, the Rolling Stones, the Corrs, and Hall & Oates, among others). Beginning in the late ’90s, Brooke’s albums were issued via her very own record label, Bad Dog.

In 2002, Brooke performed a pair of songs on Disney’s Return to Never Land soundtrack, contributing an original composition (“I’ll Try”) and a cover (“The Second Star to the Right”). Two years later, she performed a set of ten shows at the Public Theater in New York, the highlights of which were collected for the 2006 release of Live in New York, complete with a DVD of the concert. Careful What You Wish For followed in 2007, and Brooke subsequently delved into Woody Guthrie’s lyric journals for her follow-up effort. Released in 2008, The Works paired her original music with Guthrie’s previously unheard lyrics. Greg Prato, All Music Guide

Read reviews of:
[Back in the Circus]
[Steady Pull]