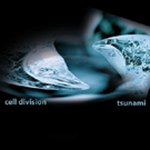 Darkwave band Cell Division hail from Switzerland. This is their first new cd in four years. Singer Gelgia c has a sweet and expressive voice that suits the music well.

The moody “Anodyne” is like a less overtly commercial song by Garbage.

Single “Hypnotized” is a rockin’ song with a great guitar part by Mirjam G. It sounds like a big alternative hit. Gelgia’s sultry lead vocal is very appealing.

“Ra” is darker but still catchy and persuasive.

“Fingerprints” is calmer but hardly a ballad. Gelgia’s singing is confident and sassy.

“Peculiar” is a duet with Sven Freidrich who echoes the Sisters of Mercy’s Andrew Eldritch. It’s a good listen for fans of Garbage and Curve.