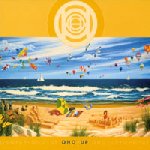 The band Oho has an interesting concept: They are a band that has rotating female lead singers. On this release those voices are Grace Hearn (on the majority of the tracks) Jane Brody, Angela Lazaroni, and Sue Ellen Sacco. They all have great voices that blend well with the music. The music might be classified as Adult Alternative. It’s catchy rock with out being hard or to too poppy.

I especially like Grace’s voice on track “Out Of Thin Air”. She’s got a nice vibrato that shows off well here without being annoying (as we all know vibrato can be sometimes).

“Danger And Play” has an 80s feel to it what with the xylophone and the nostalgic drum beat. In fact several songs have that sense to me.

There is some fancy fiddle work on “The Secret” and “It Will Not Be Late”.

This is a CD with several song and various styles. There ought to be something here for everyone.